You are here: Yet Another Game System » Rules » Firearms 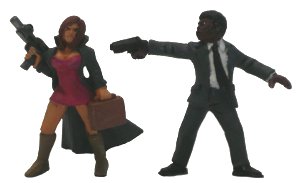 Modern firearms can be difficult to do well in an RPG system, and many rule systems fail dismally when it comes to trying to replicate them. Things aren't helped by the fact that most people (thankfully, including those who have contributed to YAGS) haven't been involved in gun fights, so have a very Hollywood view of how guns work.

The main issues involved in porting the real world to a simple set of game rules included:

Lethality of firearms. In Hollywood, mooks die with a single shot to the toe, heroes only ever suffer flesh wounds. Reality is complex, and though a single shot can kill, many people either survive, or die much later from bleeding.

Accuracy of firearms. This can vary greatly depending on circumstances. Modern assault rifles are accurate out to hundreds of metres in tests, but accuracy in combat is much lower. Gun fights at ranges of several metres (yes, metres) have resulted in zero hits by either side.

Automatic fire is very inaccurate. It is good at suppressing, not so good at killing. Heroes dodging hundreds of bullets in Hollywood films aren't quite as laughable as you might think (though they can still be quite laughable).

There is a huge variety of firearms. There's a reason beyond simple capitalism that there are many different types of guns, from pistols through SMGs to assault and battle rifles to sniper rifles. They all have their advantages and disadvantages which come into play in different situations. Capturing those reasons without getting horribly complicated is tricky.

YAGS aims for what it calls Cinematic Realism - keeping to a style that contains a certain level of realism as in grittier action films, but with clauses that allow PCs to survive a bit longer as long as they don't do anything too stupid.

The Man with the Golden Gun

A good marksman can pretty much kill a person with a single shot, but in the heat of combat shots are taken quickly and may be lucky to hit the target at all, let alone hitting a vital organ. YAGS avoids the use of hit location charts, mostly because they're complex and actually lack the realism they pretend to give (assuming a static target that is always standing up in plain view and facing directly towards you for example).

A typical pistol shot will inflict 2-3 wounds against a person without body armour. This is survivable, but not something you'd want to suffer too often. An assault rifle is closer to 4-5 wounds, and is going to make continuing the fight difficult for most people, but is unlikely to be an instant kill. This allows one shot to take someone out, but not be immediately lethal. This has been a conscious decision in YAGS - making it easy to incapacitate someone, but difficult to kill someone. This stops PCs acting as if they're immortal, but also reduces the body count.

The second class of person is represented by a character who also knows a number of firearm techniques - such as sharpshooter, quick load, multiple targets etc. They will be much more effective in combat, even though they're about the same on the gun range. They will nearly all be (or have been) professional soldiers (some police may have such techniques, but they will tend to be limited to SWAT teams).

Body armour helps, but is limited in effectiveness. The amount of extra soak conveyed by modern body armour is quite low (typically less than 10 points), so even a pistol shot will still inflict damage. However, the damage type is reduced so the target will likely suffer stuns rather than wounds.

The problem in game design is the wide range of performance characteristics between knives and bullets. Kevlar vests may stop a bullet, but they won't stop a knife. The low soak keeps their effectiveness against melee attacks low, whilst the damage type change simulates the blunt trauma that is often still suffered by wearers.

There are some notes on bullet resistent armour available on wikipedia.

Future-tech armour may well give good protection against everything.

As everybody knows, Imperial Stormtroopers couldn't hit a barn door at twenty paces, despite apparently being highly trained troops. Bad guys in many Hollywood epics are also often trained at the same school, enabling heroes to escape despite being the target of many fully automatic assault weapons.

To some extent however, this isn't as necessarily unrealistic as it seems (there are a number of resources available on the internet which go into some detail on just how ineffective guns can be at anything other than point blank range when used in real combat), and YAGS focuses on two core points in order to give heroes a fighting chance.

Firstly, automatic weapons are horrendously inaccurate, especially at anything more than short range. They are good at suppressing an area, and forcing the enemy to keep their head down (you probably won't get hit, but most people aren't willing to take the risk), but not actually effective at taking the enemy out. Many modern war games actually get this right, with 'pinned' or 'suppression' results a lot more common than actual casualties.

Secondly, mooks are often not very well trained, and don't understand the first point. Most assault rifles can be emptied in a single round of combat, so not only have the enemy not hit you, they are now out of bullets.

It is expected that trained soldiers (which may be PCs) will tend to go for semi-automatic shots rather than automatic fire, giving them a better accuracy. However, YAGS does give automatic fire the chance of an automatic hit (on a natural 20), to keep the danger levels present.

Keeping your Head Down

YAGS has two rules in particular which limit firearm effectiveness in a real fight - initiative and cover.

Clever use of cover enables a character to dodge a bad guy's reflexes, rather than their bullets. The rules for cover are deliberately quite detailed, allowing a number of options depending on the type of risk PCs wish to take.