You are here: Yet Another Game System » Rules » Experience

In most RPG rules, characters have the option of developing their skills and abilities after character generation. Often, this is done with experience points which are either used to directly buy up skills and abilities, or which go towards some form of level advancement.

The notable exception was Traveller which lacked a development mechanic. Characters were assumed to be experts at their field when they entered play, and further advancement was rare.

Yags doesn't consider character development to be a core part of the rules, and so may differ between settings and genres. A discussion of possible options follows. These are not hard and fast rules, but can be used to determine how best to allow advancement in your own campaigns. 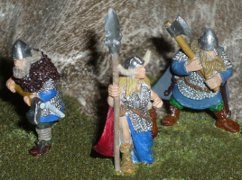 The traditional way for PCs to improve skills is by adventuring. Experience points are gained from doing heroic deeds, overcoming foes and good roleplaying. This is suitable for heroic games, especially those where PCs begin relatively inexperienced and advance quickly in fame and ability.

The easiest way to implement this is to award experience points after each session - in the order of 1-3 xp would be recommended, the exact amount depending on how quickly the GM wants characters to advance. Optionally, a bonus point can be awarded for heroic deeds or good roleplaying for individual PCs.

A rate of 1xp per session will give a steady but slow progression, and is recommended for more realistic or long term campaigns. 3xp per session will result in PCs gaining ability quickly (3 sessions to go from totally unskilled to a professional level), though it is possible to limit this by not allowing more than 1 xp to be placed on a single skill per session. This encourages a broader skill base, and a concentration on techniques.

Even if experience is being awarded for adventuring, it may be beneficial to award experience for specific skills which may have been realistically picked up during the game. This is on the job training which allows characters to gain some ability in secondary skills.

For example, if characters are hiking in the wilderness, then it may be suitable for them to pick up some Survival. If they're spending a lot of time in the library, then gaining some points in Research is reasonable. Skills like this, which tend not to be immediately fatal if failed, and which can be used with no skill, are well suited to being picked up through the character blindly trying things until they work.

How quickly points are gained depends on the current level of skill, but characters shouldn't be able to progress beyond a skill of 4 in this way. The table below gives some guidelines.

Optionally, an Intelligence check may be required, though this is left to the GM to decide. Alternatively, Intelligence could be used to cap the maximum skill obtained. An Intelligence above 4 in this case would allow characters to continue learning beyond this level. For purely physical skills, swapping Intelligence for Health is a perfectly valid option.

Note that since this limits improving skills beyond a basic level, it needs to be combined with another system to use as the primary method for character advancement.

Some campaigns are based on a fixed cycle of adventuring and downtime. Pendragon is one example, where characters have a single adventure during the course of the year, then spend Winter performing courtly functions and sorting out background details (such as raising a family).

For such campaigns, it makes sense to allow advancement on a yearly basis. Possibly experience is gained in a heroic style from the adventure, it being assumed that skills are learnt both during the adventure and during downtime.

The end of year process can include other advancements, such as raising attributes. A point could be freely given to raise attributes at the end of each year, up to a character's age of 30. Yags has no aging mechanics, but if you want to give characters a reason to retire, then having them take a point off an attribute each year after 50 is one way to encourage it.

The most realistic, but hardest to implement, option is that of training. Characters do not receive points for development, but must instead spend game time training. This may involve reading books, attending courses or spending time learning 'in the field'.

This method is best when adventures are uncommon (possibly months or years between them) and characters have a lot of down time. It also avoids the common feature of many games where characters begin as inexperienced 16 year olds, and end up as best in their field before their 17th birthday. It also combines well with passive improvement, though can be in addition to heroic advancement as well.

A trial set of training rules can be found in Yags SciFi, though they are not fully complete. The complexity comes in figuring out the availability and cost of teachers.

At the other end, there is the option of no development after character generation. This is most suited for when characters begin the game already highly experienced. They're already near the top of their field of expertise, and are unlikely to improve further.

But 'no development' does not mean it's impossible, just that there isn't a standard mechanism for it. The GM may award skill improvements (or new skills) if there is a good in game reason for it, as per passive improvement, but primary skills won't improve.

The bulk of character development though is expected to come from the story - gaining contacts, knowledge, access to resources and further progression towards some final goal.