You are here: Yet Another Game System » Rules » Space Combat 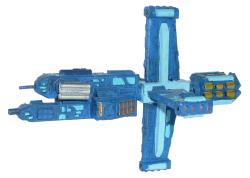 YAGS SciFi is a genre specifically designed to allow for space combat, in a way that is interesting for players and suitable for games modelled on science fiction TV, books and films. It is probably slightly harder than the sort of space combat often portrayed by Hollywood, but would be suitable for series such as Babylon 5 or the re-imagined Battlestar Galactica. Ultimately, a lot of the terminology has been inspired by Traveller.

The full set of rules for space craft isn't yet completed, but will be part of the SciFi Tech equipment rules (just as Vehicles is part of the High Tech article). What follows is an overview and introduction, as well as a set of design requirements.

These rules cover YAGS SciFi, not YAGS Ultra Tech. Though there will be many shared features of both, each represents a different view of physics. Ultra Tech is grounded in much harder science fiction, where space battles are long and boring. SciFi is more interested in action orientated science fiction - softer, but not too soft.

Some example starship designs can be found on my Traveller Resources pages.

Space is big, sometimes it's too big. There isn't much out there between the stars, indeed, there isn't much between the planets either. Any realistic portrayal of asteroid fields is also going to be disappointing to anyone whose expectations have been raised by watching The Empire Strikes Back.

As such, there's not much to fight over in deep space and physics and maths mean that the chances of two fleets meeting up in the middle of nowhere is pretty slim. Most battles are going to be fought close to a planet or similar resource. Even in an asteroid belt, a battle is likely to focus on a single asteroid rather than being fought amongst a cluster of asteroids.

Though the grandfather of science fiction RPGs defines space combat happening at ranges in excess of millions of kilometres, YAGS prefers something a bit more personal than a game like Traveller uses. PCs are often skirting the edge of the law, and generally fly small craft that need to run away from big craft (for example, because they're blasting their way off planet, and need to avoid the patrol cruisers in orbit). If the effective range of ships of the line is much more than thousands of kilometres, then a single patrol cruiser can cover an entire planet. Escape is going to be hard.

With effective combat ranges not more than hundreds of kilometres, it becomes possible to dodge most blockades with some careful timing and fast acceleration. It makes it more friendly to PCs.

Space combat is measured in turns of 10 seconds, twice the length of a round in personal combat. This relatively short time period allows for action orientated combat, with characters piloting spacecraft rather than plotting courses and feeding them into a computer.

Even so, there is a conceptual difference between small craft and larger craft - the spacecraft piloting skill becomes less useful the larger the craft being piloted.

Distances in space combat is measured in kilometres. For small craft (e.g., the type PCs are likely to be using), effective ranges will tend to be limited to a few tens of kilometres. This does mean that most targets won't be visible to the human eye most of the time, but you will see points of light, and the occasional glimpse of something more as fighters shoot by.

At this scale, planets are big - effectively borders to the combat zone rather than objects in it. If you want objects to fight around, then they need to be asteroids or comets. The moon Phobos for example is 20km across, though dwarf planets such as Ceres (900km) would be a heavily curved border.

Combat could also occur in an atmosphere (as PCs try to escape from a planet for example), with the atmosphere taking several game turns to clear.

It is expected that space ship combat will be handled much like a wargame - players use models or markers to plot their tactics on a two dimensional board. The third dimension could be modelled, but doing so is difficult and it is felt that it doesn't add enough to the game to be worth doing except in specific scenarios. 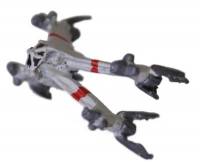 YAGS uses a logarithmic scale for vehicles, with every 5 points of Size being equivalent to a ten fold increase in volume. This actually allows for very large spaceships without requiring the use of very large numbers to keep track of them.

Since weapons are also scaled, small weapons won't affect large targets and large weapons have difficulty aiming at small targets. There's a trade off to be made in the type of weapons to carry, and also a reason to have smaller ships. Except for point defence, ships of the line will tend to focus on carrying large weapon bays dedicated to destroying other ships of the line.

The smallest craft will be light fighters, at around Size 15 (equivalent to 100 cubic metres, or abut 7 displacement tonnes of liquid hydrogen). Small trading vessels will be in the 20 - 25 range (1,000 to 10,000 cubic metres, or 70dt to 700dt). Ships of the line will be in the Size 30 to 40 range unless the setting allows for really large ships kilometres in length. A Star Destroyer would be about Size 44, a planet destroying battle station about Size 80.

YAGS SciFi assumes that for the most part, to go forward you need to throw something backwards. Space ship drives at 'low' technology levels will consist of chemical rockets and ion drives, with later technology bringing in fusion torch drives with 'magical' efficiency and damage causing ability. Ships still need to carry reaction mass ('fuel'), so are limited in how far or how fast they can go, but at higher technologies the limit stops becoming a problem.

Limited manoeuvring ability will be an important criteria of early space battles however. Travel between worlds will be slow (weeks or months, but not years).

The default setting has travel between stars using Jump drives which carry ships several parsecs in a single jump that lasts a week. Instant communication is not possible, leading to fractured empires which have to rely on local bureaucrats or nobles to manage when a crises occurs. This allows a setting where PCs can be out on the rim of known space, with little contact with, or support from, those back home.

On the surface of planets there will be repulsor fields which allow a form of anti-gravity. These become available at mid to high technology levels, and push against solid matter, allowing a vehicle to float above the surface without needing some form of thruster. Many space craft which need to land on planets will use them since they have less tendency to burn the landing site than fusion thrusters do.

Such repulsor fields have their limitations - they are not so good over water (which is less dense, and reduces the effective altitude) and almost useless over bridges. Repulsors require about ten times the altitude in solid mass (they push against actual mass, not the local gravity field) beneath them to maintain altitude. The exact amount varies according to the density of the ground, and there will be many sports which take advantage of this to build race courses.

Most repulsor vehicles, especially at the earlier technology levels, will be limited to a few metres of altitude. Specialist vehicles at high technologies will manage tens of kilometres, but they will be slow and ungainly and often rely on another form of propulsion to actually move around.

Such limitations allow a split between tanks and space craft. If a space ship can fly along the surface, up in the atmosphere or out in deep space with equal capability, then everything becomes a space ship. This isn't necessarily a bad thing, but YAGS SciFi prefers to delineate such types of vehicles from each other